He has such a motivating life story that could become the reason for your next success.

So, begin this inspirational biography of Anand Ahuja and move toward your success.

Who is Anand Ahuja? 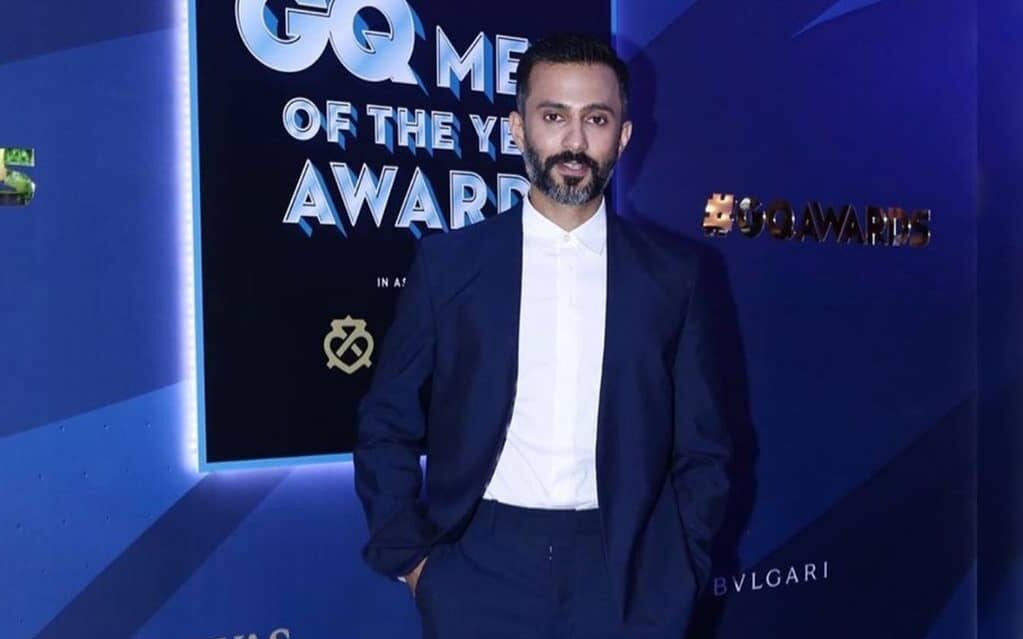 Anand Ahuja is a young fashion businessman and entrepreneur who has founded the clothing brand, Bhane.

He is widely famous for being the husband of Sonam Kapoor, an immensely popular actress. Anand Ahuja is also the managing director of his family-possessed business, Shahi Exports.

The company is consistently showing good results and has a turnover of around $450 million every year.

Anand is also the co-founder of India’s first sneaker store, VegNonVeg. He is among the top Indian entrepreneurs who are an inspiration for the Indian youths.

He has also nominated for the GQs Most Stylish Man of the Year award. Moreover, Anand likes to play Basketball and is a big fan of the basketball team, Los Angeles Lakers.

Anand Ahuja was born on 29 July 1983 in a rich family in Delhi, India. He is 37 years old as of now. His father, Harish Ahuja is a businessman, and his mother, Priya Ahuja is a homemaker.

Anand grew up in Delhi’s posh Jor Bagh locality. He has been never suffered from any financial crisis in his early life.

He was rich that time and even more rich today. Anand has spent most of the childhood with his brothers. His family has a very strong unity and this led them to live a very happy and easeful life.

Anand Ahuja began his elementary schooling at American Embassy School, New Delhi. He was very standard and has severely performed well in his school subjects.

He then moved to the Wharton School of the University of Pennsylvania to pursue his further education. There he did the Bachelor of Science, Economics, and International relations in 2007.

Anand Ahuja then enrolled in the University of Pennsylvania to complete his mastery in Business Administration.

But for some reason, he didn’t continue his studies there and dropped out the university,

Later, Anand did his internship with Deutsche Bank and worked at Amazon as a Product Manager Intern. He further worked at Macy’s as an Assistant Buyer.

Owning higher and professional education from reputed universities, he succeeded in running the business and expanded it a lot. He then thought to find a new business idea and to operate from the start.

In 2011, he led to the formation of a new business and named Bhane. The company was started by him along with 2 other designers.

In the beginning, they were putting their ideas for pieces they wanted to make. He was consistently thinking about designing and prototyping for the Bhane business.

Even once he was packing boxes in his uncle’s apparel warehouse in New Jersey. He wanted to do everything he can for growing his newly formed business.

Back in 2013, he went to work in sourcing at his uncle’s wholesale company. There he learned about the interaction of the companies with the wholesalers.

Bhane was never quiet and always tried to clear the obstacles of his life. He gave most of his time to learning so that he can prepare himself for the right action.

And now everyone can see where his business, Bhane is today. Anand Ahuja’s company, Bhane annual turnover comes nearly 3000 crores.

The rise in Anand Ahuja Business

After finalizing his Bhane business, he didn’t stop there. Anand was passionate about apparel and sneakers. This led him to the formation of a new business named as VegNonVeg.

This is India’s first multi-brand sneaker store which has grown sharply from its initial start.

The Business became more popular after the marriage of Anand Ahuja to Sonam Kapoor. VegNonVeg has also a strong follower community on its social media platforms.

Currently, there are over 232K followers on its Instagram page. The company is generating a revenue of around $3 Million per year.

Anand has also collaborated with one of the top brands, Nike. This helps him get the shoe products at a reasonable price which he further sells to the customers.

Similarly, he has achieved several peaks in his life. Anand Ahuja is the name which is sure going to be remembered in future also.

His advanced level of aptitudes and managing power prove his business capabilities. Thus, he is sure going to take a J Curve success in his life.

Anand Ahuja married Sonam Kapoor on 8 May 2018 at Rockdale, Bandra, Mumbai. He got so popular and gained a lot of fame after being the husband of Sonam Kapoor.

Because she is one of the renowned actresses of India and well famous in overseas countries. She has appeared in more than 22 movies since 2007.

As per reports, Anand first met with Sonam Kapoor in 2014. She was introduced by Anand’s fashion designer, Pernia Qureshi. Within a month of their meeting, Anand proposed Sonam Kapoor.

After many times, their families announced their marriage on 2 May 2018. Further, Sonam Kapoor officially said that she was going to marry her boyfriend, Anand Ahuja on 8 May.

In this way, they got married and lived there living wonderfully.

Anand Ahuja estimated net worth in 2021 is INR 5000 crores. His wealth sources include his main business Bhane, Shahi Export, and VegNonVeg.

In addition to his wealth source, he also earns from advertisements, awards, events, collaboration, and more. In fact, his company, Bhane has a stand turnover of more than INR 4 million per year.

All, he has such an amount of money which can’t be kept in a particular place. And it’s all because of his hard work and persistence for his dream.

Anand Ahuja has worked at several places in different posts, while that is CEO or Assistant Buyer. Below are mentioned his major work history.

Anand says that being an Assistant Buyer at Macy’s appealed to me the most as it was dynamic. And also required a lot of teamwork and group interactions.

In presence of some best managers and buyers, I learned several things about how the stores interact with customers.

Anand Ahuja is one of the successful entrepreneurs of India who has achieved several peaks at a very young age. He is a motivation and an inspiration for the Indian youths.

Apart from being a successful businessman, he is also a basketball fan and a very caring husband.

Every people in this world need to learn from his life. His day-night works and efforts led him among the top Indians.

He worked in several places and tried to learn everywhere he could. He never compared his job status but focused on his learning. At last, he ended up getting remarkable success in his life.

We hope you gained everything including Anand Ahuja biography, education, career, age, marriage, wife, and net worth.

Let give your feedback below and let us know how you felt after reading this inspirational biography.