Here is one of the greatest British racing drivers, George Russell. He is leading all his way through his remarkable performance in the racing industry.

George has won millions of hearts and is creating a strong follower community across the world. He is now an inspiration for many youngsters. Let’s read his biography and know-how a simple man becomes a racing champion.

Who is George Russell?

George Russell is a popular British racing driver who is currently competing in formula one. Since his early years of karting as a toddler, George has taken motorsport as his breathing line.

And since he’s always aimed for the best in his line of view, George’s career has been nothing but unbroken success in both races and championship wins.

He is a 22-year-old British rising star from Kings Lynn, who is aiming to achieve the ultimate goal of becoming Formula 1 World Champion.

He has been FIA Formula 2 Champion for ART 18 position and the 2017 GP# series champion. He has never been out-qualified by a teammate in his career. 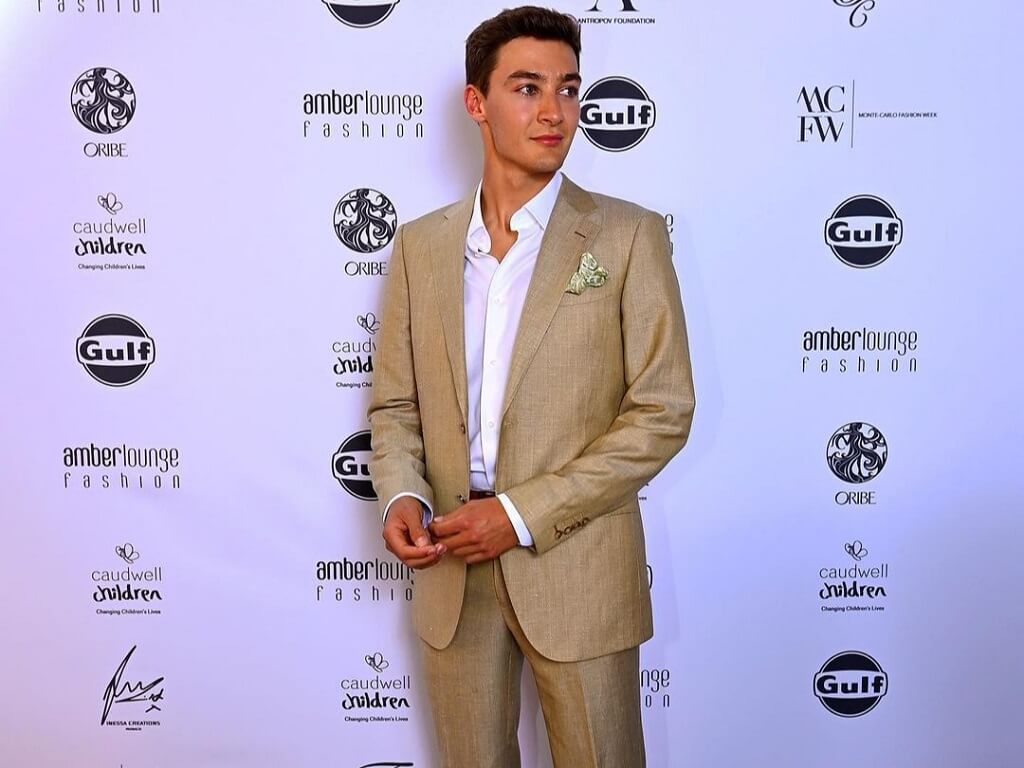 George Russell was born 15 February 1998 (and his current age is 23 years) in King Lynn, the United Kingdom to Steve and Alison Russell. He has one brother Benjy Russell and one sister Cara.

His older brother Benjy also took part in the Karting championships. While his sister Cara didn’t invest herself in motorsports, she is constantly backing her little brother as he competes in F1, thoroughly showing support through social media.

Not much is known about Russell’s parents, but they have supported him from his carting days up to the pinnacle of his sports career. He currently lives in Wisbech, Cambridge shire.

George is the youngest sibling. His favorite track is Sarno Italy. He stands at a height of Height 1.85 m. When George was asked to fill in for Lewis Hamilton last year, it is understandable that his family was proud. And when he had to settle for a ninth-place finish, his family was devastated.

“My mum was in tears bless her, afterward and my sister as well. We live this together, this sport and it’s so passionate, emotions are so high.

This was my first opportunity, not to just win, but to actually score points and that was such a big difference. Having that taken away from us not once but twice was difficult.”

Williams Racing Formula 1 Driver, George Russell is starting his third year at the pinnacle of motorsport. His career began with humble beginnings in karting from 2006. Since his talent was evident, he soon became the MSA British Cadet champion and British open Champion in 2009.

He made his debut in 2019 at the age of 23. This is how he introduced himself to the world of British motorsport.

In early 2017, George was announced as the latest addition to the Mercedes-AMG PETRONAS Motorsport Line up.

In the same year, he competed in the GP3 Series- a support series Formula One racing for frontrunners ART Grand. In 2020, he was involved in some massive killing performances.

He regularly outperformed his machinery by making 9 Q2 appearances throughout the season and even threatened points finishes on numerous occasions in the Williams. 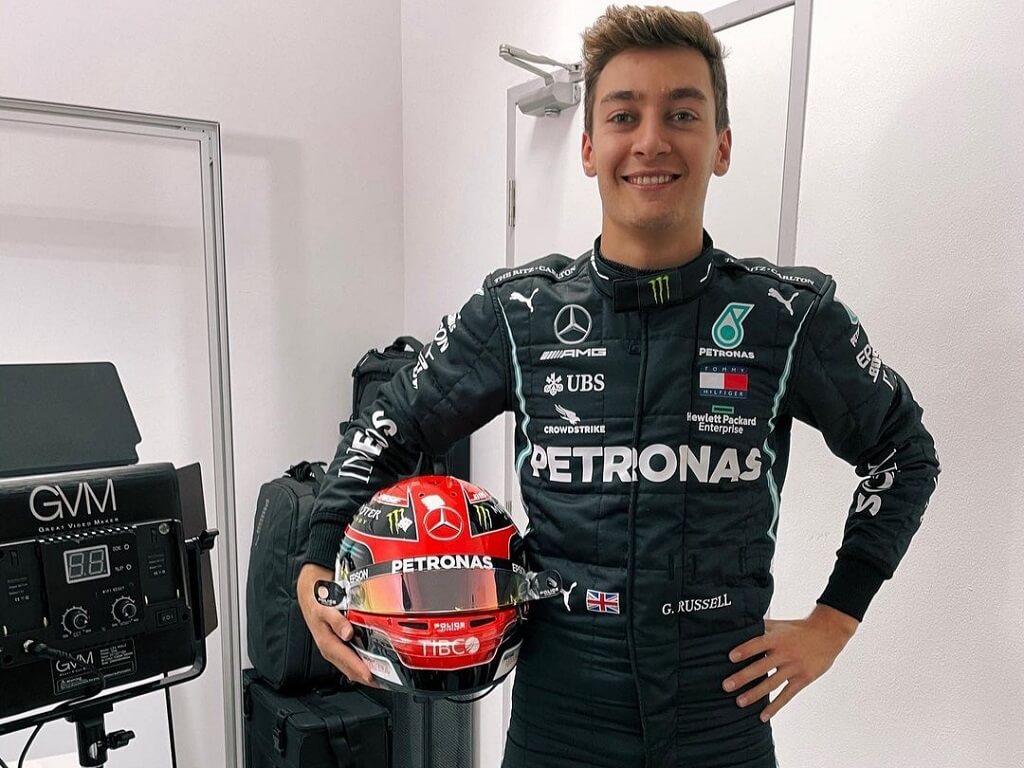 At the Sakhir Grand Prix, George got a chance to replace unwell Lewis Hamilton in the Mercedes. He then showed an incredible performance which resulted in qualifying P2 and leading the majority of the race.

No doubt George Russell is a star in the sports universe and 2021 will see him compete again with Williams racing as the team embarks on a new chapter. George Russell has earned a lot of fame considering the young age he’s at.

The biggest factor in his success has always been his perseverance and an urge to succeed. His teammates always found him friendly and compromising at every race. He’s the driver with the motto “If in doubt, go flat out”.

Russell is currently dating Carmen Montero Mundt who is a business and management student. The couple was first spotted in the paddock at the 2020 Tuscan Grand Prix. 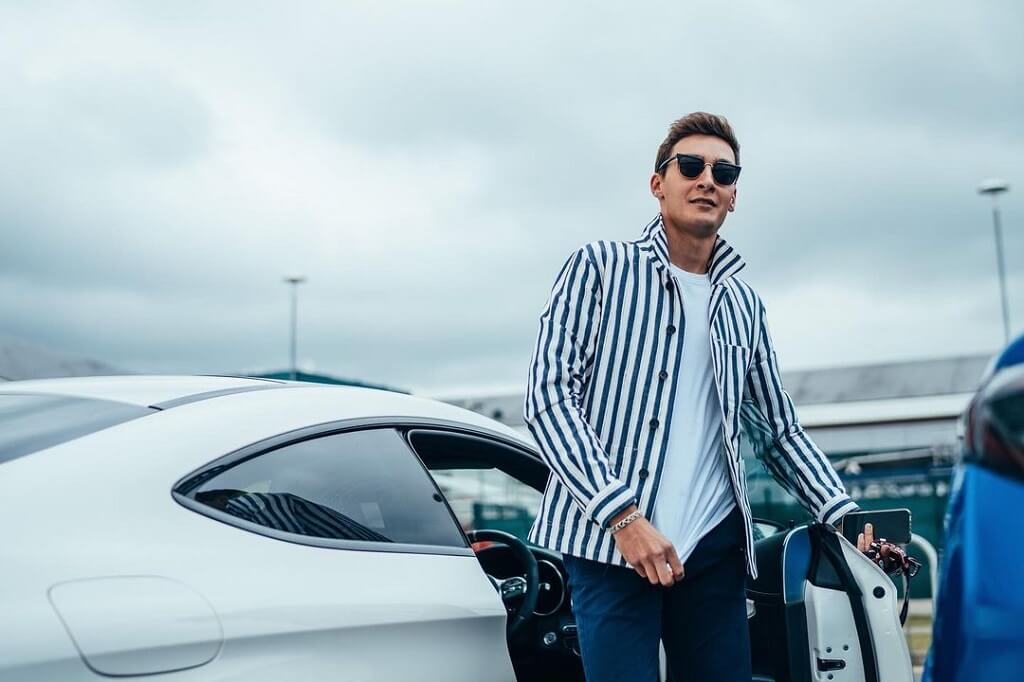 George Russell estimated net worth is $1 million dollars. He has highly earned it through his driving career. This is really a good field where the players can get a good amount.

Besides this, his popularity is enough to let him earn some capital. He can do this by paid promotions and advertisements on his social media platforms. At all, George has a huge net worth and can be used for his whole life.

George Russell is highly popular across various social media platforms. And obviously, he would be as his amazing career has inspired millions of people in the world.

He is also available on the Twitch platform where he is holding more than 213K followers. Along with these, George has gained the blue verified tick on all of his social media platforms.

This really proves his popularity and makes him great.

George Russell has lived by it in his F1 career to date which has proved Williams right in identifying him as a hard worker and a tenacious talent.

With Formula one taking its hiatus in August, the season is on hold till the month ends. It is yet a mystery as to who will be the teammate of Lewis Hamilton in 2022. It will be a decision that’s going to cause an uproar in the sports world.

The competitors in question are, Valteri Bottas? Or George Russell? George Russell’s body language leading into the summer break suggests he knows what’s looming on the horizon for him.