The popular TikTok single “What’s Poppin’” brought Harlow viral fame in 2020, but it was “Industry Baby,” his Grammy-nominated hit with Lil Nas X, that turned him into a pop culture mainstay.

His choice to collaborate with Lil Nas, whose sexuality has been shamed by other rappers, was quickly politicized. So this is how this personality got famous.

Who is Jack Harlow? 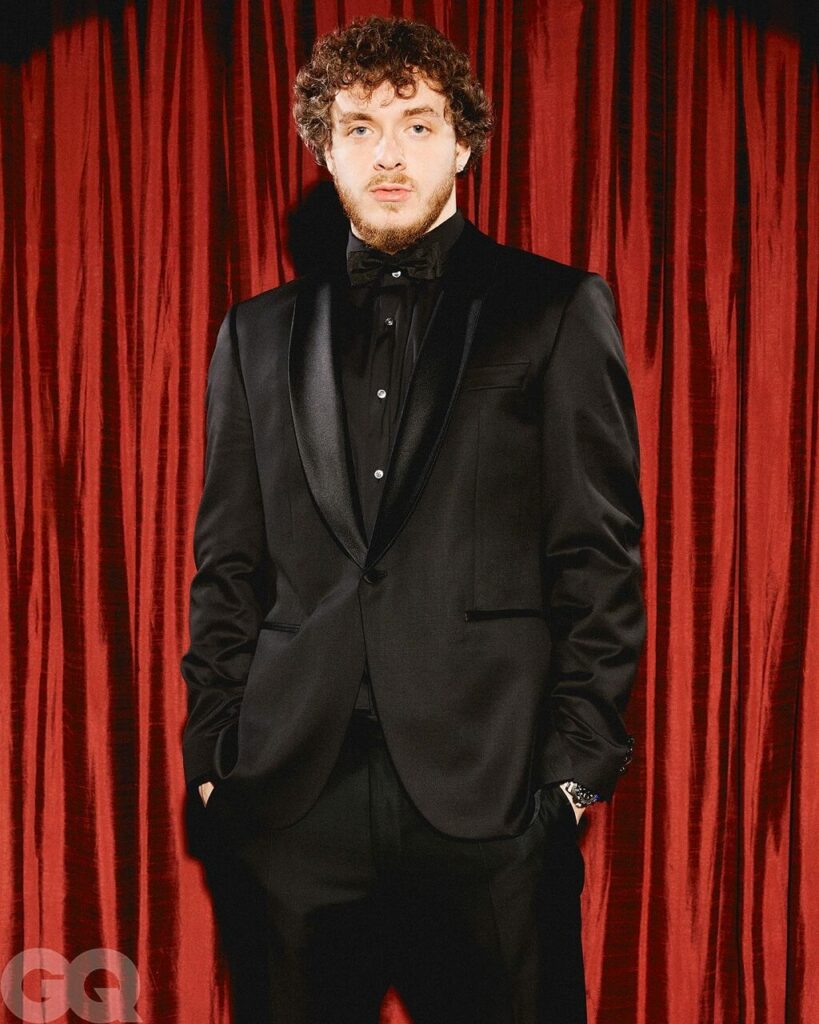 Jack Harlow is an American rapper and songwriter. He is a popular figure on social media and a rapper from Atlanta. Also, he is one of the founding members of the musical group Private Garden.

Currently, he is signed to Generation Now, a record company owned by Don Cannon, DJ Drama, and Atlantic Records.

His 2020 hit single “What’s Poppin” is what made him most famous.

The single or remix of “What’s Poppin” (featuring DaBaby, Tory Lanez, and Lil Wayne) peaked at #2 on both the US R&B/Hip-Hop chart and the Billboard Hot 100 chart.

On December 11, 2020, he released his sixth album, That’s What They All Say, which debuted at number five on the US Billboard 200.

That’s What They All Say, Jack Harlow’s debut studio album, was released in 2020.

Jack Harlow was born on 13th March 1998 in Shelbyville, Kentucky, the U.S.A. Jackson Thomas Harlow was his name. He is of mixed ethnicity and has American nationality.

Moreover, he has French and Irish ancestry mixed together.

Jack was raised in a prosperous family. Brian Harlow is his father, and Maggie Harlow is his mother. Both of his business-savvy parents own and operate the same company.

He was raised in Louisville after his family relocated there when he was a youngster. Clay Harlow, his younger brother, is someone he adores very much.

He attended Highland Middle School when he was younger.

He enrolled at Atherton High School after finishing middle school, where he received his diploma in 2016.

To further his musical career, he relocated to Atlanta. He worked at Georgia State University after relocating there. 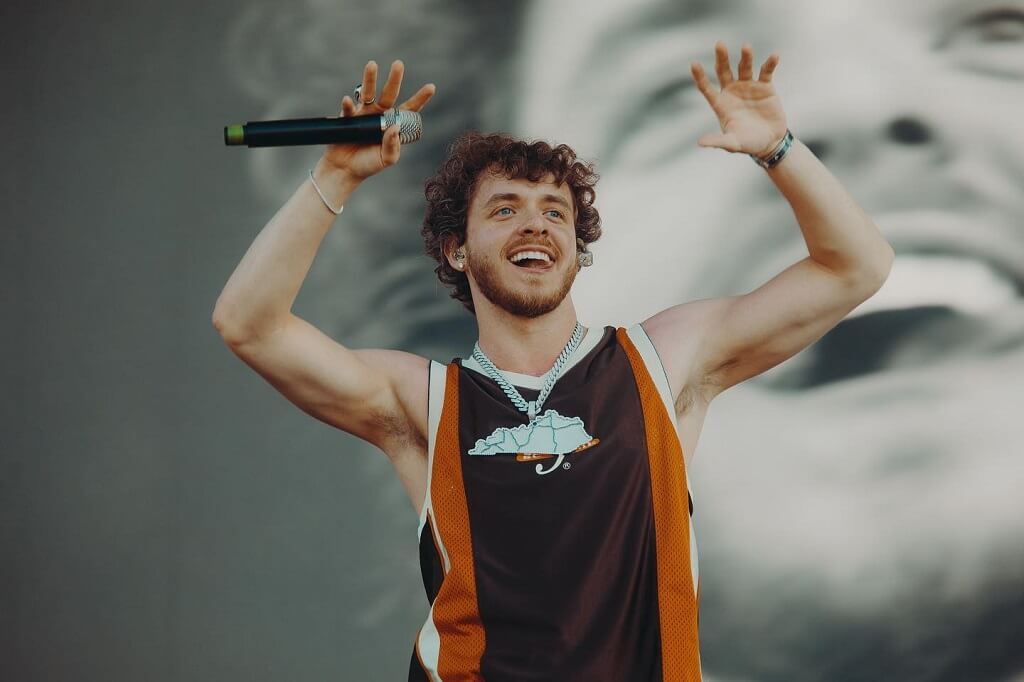 The Handsome Harlow, an EP, was the first commercially available record by Harlow. It was published by the sonaBLAST! record company, run by Gill Holland.

He frequently performed to packed houses at Louisville venues like Mercury Ballroom, Headliners, and the Haymarket Whiskey Bar throughout his senior year.

Further, he served as Vince Staples’ opening act in Louisville in March 2016.

Later, he released the mixtape 18 in June 2016, less than a month after earning his high school diploma from Atherton.

This was the first album on his label and music collective, Private Garden.

Harlow worked at the Chick-fil-A in the Georgia State University cafeteria after relocating to Atlanta to supplement his income. He met DJ Drama at Mean Street Studio a month after starting his job at the cafeteria.

It was revealed in August 2018 that Harlow had joined Atlantic Records and DJ Drama and Don Cannon’s Generation Now record label. On the day of the announcement, he also made the music video for his single “Sundown” available.

Loose, Harlow’s debut mixtape for a major label, was released on August 17. Guest verses on the album were contributed by CyHi the Prynce, K Camp, 2forWoyne, and Taylor.

The video, which was made by Cole Bennett, has received over 135 million views as of May 2021. The song was widely shared on the TikTok social media platform.

The remix of “Whats Poppin” by Harlow, which includes DaBaby, Tory Lanez, and Lil Wayne, was made available on June 24, 2020. The song rose to number two on the Hot 100 thanks to the remix.

Harlow’s first number-one single on the chart was made possible by the song’s success on the Hot 100. He jointly released “SUVs (Black on Black)” on August 3, 2021, with Pooh Shiesty.

“Nail Tech,” the lead single from Harlow’s upcoming second studio album and his first release in six and a half months, was made available on February 18, 2022.

When we look at Jack Harlow’s social media pages on Facebook and Instagram, we are unable to identify his girlfriend or any connections to the girls.

He always appears to be taking pictures of himself, with friends and fans, or with random models from his music videos in every photo and video that he posts.

We can infer from this that he is a man who is very committed to his work and career. This handsome rapper might have avoided relationships because of his dedication to his career.

In addition, Mr. Harlow enjoys keeping his personal affairs a secret and is very secretive about them.

However, there have been rumors that he has a romantic relationship with American social media star and Tik Tok star Addison Rae, which has been mentioned by a number of online sources.

In November 2020, at the Jake Paul vs. Nate Robinson Triller Fight Club boxing match, Addison and Jack could be seen spending a lot of time together and getting to know one another.

Even though Addison Rae was out of frame, one fan tweeted a picture that Jack Harlow had posted that appeared to show her hand on him.

When Addison posted to her Instagram story in June 2021 and tagged a photographer in the process, rumors started to spread online once more.

It has been rumored that Harlow has visited Los Angeles and gone to events that Addison has, so it’s possible that they have kept in touch.

However, the two haven’t explicitly stated whether they are dating or not.

The estimated value of Jack Harlow’s net worth in 2022 is $4 million. He makes between $500k and $1 million per year. From the sales of his albums, he has made millions.

Additionally, he has earned hundreds of thousands of dollars through his performances and tours.

Also Read: Who is the Fastest Rapper in the World in 2022?

Jack Harlow stands at 5 feet 9 inches, or 175 centimetres, and weighs 77 kilogrammes, or 169 pounds. He is physically athletic and muscular.

He regularly works out at the gym to keep his body in shape.

His long beard and mustache make him appear appealing.

He expresses his interest in high-end fashion by donning expensive and stylish clothing. He has sparkling eyes that are hazel in color. His brown, curly hair is styled in a way that makes him look good.

He has a strong physique and a well-kept body overall.