You might have heard about many models in this world. Well, it’s good, but here we are talking about Mirtha Legrand, who is best known for her acting skills.

She dreamed to become a famous actress and model and hence, her hard work paid off.

Being her fan or a story enthusiast, you must be courageous to know about Mirtha Legrand.

So, without further ado, let’s begin her biography below to know more about this great actress.

Who Is Mirtha Legrand?

Mirtha Legrand is an Argentine actress and television presenter. Legrand is one of the most popular entertainment figures in Argentina.

Mirtha appeared in 36 movies and twelve theatrical performances, but still, Legrand is best known for her television programs. She is having a strong career of 80 years.

She is best known for her roles in Educating Niní and in Los Martes, orquídeas in the year 1941.

She has hosted famous TV shows of that time, Almorzando con Mirtha and La Noche de Mirtha of that time.

Mirtha Legrand was born on 23 February 1927. Her real name is Rosa María Juana Martínez Suárez. She is the twin sister of Silvia Legrand. She had a brother named José Antonio.

At a very young at, she made her acting debut in the 1940 film Hay que educar a Nini, at that time she was only 13 years old.

She and her twin sister Silvia co-starred in several films together. Mirtha was born to José Martínez, who was a librarian, and her mother Rosa Suárez was a school teacher.

Due to some misunderstanding, her parents were separated and her mother Rosa moved to Rosario with Mirtha and her other two siblings.

In 1939, Mirtha began her career in the carnival. She participated in a contest organized by the Diario de Cine program that was Cinema Diary at Belgrano Radio.

In the year 1941, She was known for her roles in Educating Niní and in Los Martes, orquídeas. And these years proved as the golden period of her life.

It was when she got recognition in the industry. In the year 1943, she appeared in Safo, historia de una pasión. Which was again a blockbuster hit of that time.

In 1944, La pequeña señora de Pérez was the movie in which she debuted her character. In the year 1948, she debuted in Passport to Rio.

Esposa último modelo in the year 1950. In 1951, she appeared in El Pendiente again a hit movie.

From 1952 to 1960, she continually appeared in Doña Francisquita, La Vendedora de fantasías, Tren international, Love Never Dies, and La Patota, and besides that, she appeared in many TV programs.

In 2013, Mirtha was nominated for Martín Fierro Awards for being the best female TV host.

Mirtha Legrand was married to Daniel Tinayre. Unfortunately, her husband died in the year 1994, at that time he was only 48 years old. 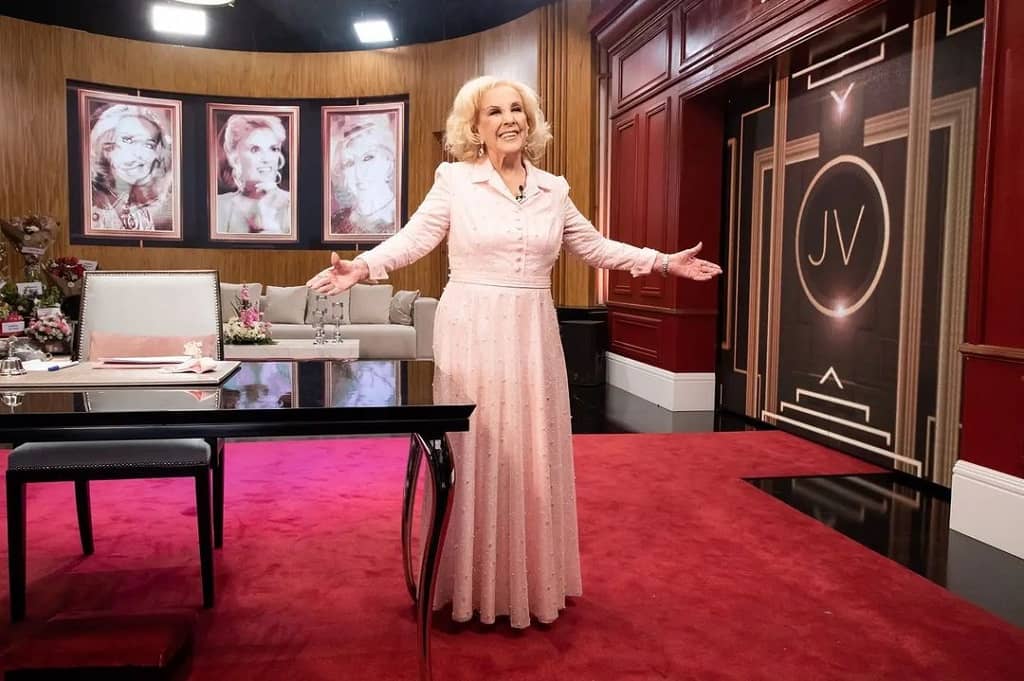 The couple was blessed with two children, Daniel and Marcela. Unfortunately, her son Daniel died from pancreatic cancer in 1999.

Now, she is blessed with her granddaughter, who is fellow actress Juana Viale.

Mirtha Legrand is very popular. She is being recognized by millions of people become of her devoting career. Social media platforms represent the popularity of the star.

And here in the case of Mirtha, she would be seen holding millions of followers on her social media handles.

According to sources, the net worth income of Mirtha Legrand is approximately $ 5 Million.

Because of her stunning performances, she is being invited by many other platforms from the same industry.

She is well known and recognized by millions because she started her career at a very young age and till now, she is devoted to her career.

Mirtha is a strong and independent woman. She is a true inspiration for all the people, especially for women out there in this world.

She is continuously devoted to her career of acting since her childhood.

And that is the reason, she has set an example of being a perfect actress. Read also – Who is Actress Jeni Ross