Here is one of the most influential singers and Tik Tok star who is winning millions of people’s hearts. He has amazed everyone by achieving such great success at a very young age.

Famously known as LILHUDDY, the young guy is leading all his way and inspiring everyone through his influencing story.

So, you also read his inspirational story below and get motivated to achieve your dream too.

Who is Chase Hudson? 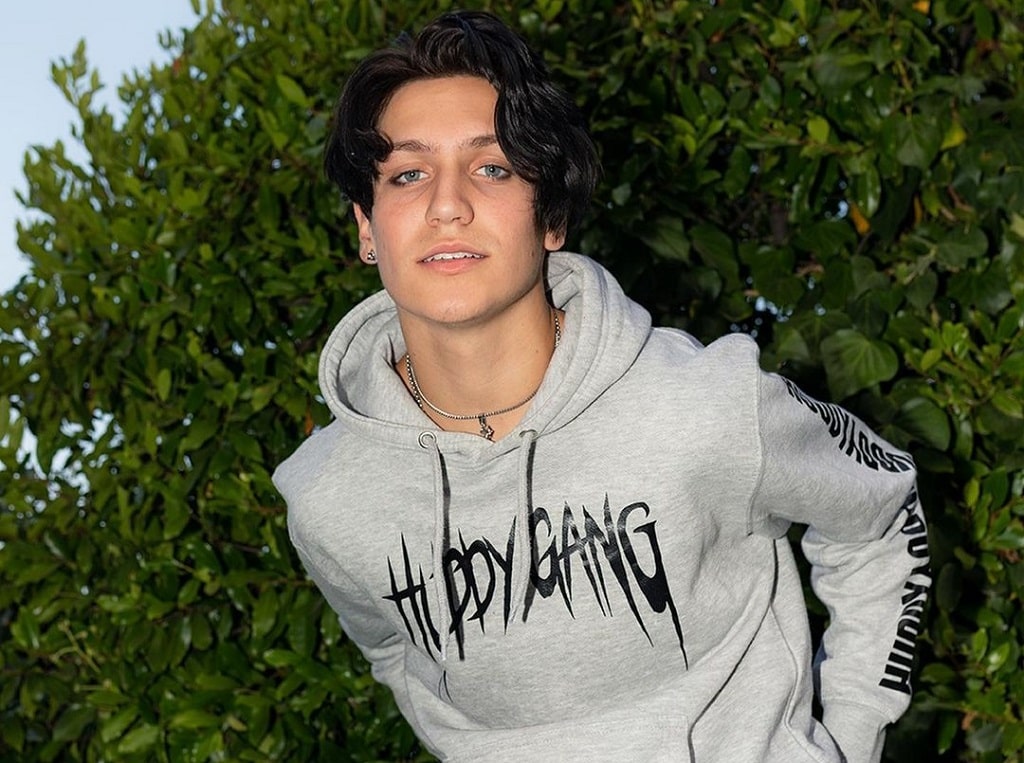 Chase Hudson is a renowned American Actor, Singer, Internet Celebrity, and Social Media Influencer. He was born Cole Chase Hudson and is now famously known as Lil Huddy or LILHUDDY.

He is widely famous for his relationship with Charlie D’Amelio, co-founding the Tik Tok collective the Hype House, and popularizing the e-boy fashion style and subculture.

As Billboard Magazine report, he is one of the top 10 music influencers on Tik Tok, holding over 30 million followers, and a very influential person on the platform.

Chase Hudson had been also nominated for the iHeartRadio Music Awards in 2021. Further, he has received YouTube play buttons for achieving the mark of 1 million subscribers.

He has achieved many more in his life. Let you see everything about Chase Hudson below in his story.

Chase Hudson was born on 15 May 2002 in Stockton, California, USA. His father, Cole Hudson works as an employee in a private company, and his mother, Tamora Hudson is a homemaker.

He was neither a smart student nor a weak. But Chase was an average student who had shown a keen interest in music from his schooling days.

He was highly attracted to music from his childhood. As per sources, Chase did his further education via online methods to continue his career on social media.

He graduated very earlier by taking three classes every semester.

Chase Hudson initially started his career on musical.ly. In late 2019, he co-founded the famous Tik Tok collective known as the Hype House with some other social media stars, including Daisy Keech, Kouvr Annon, Alex Warren, and Thomas Petrou.

Later, Hudson was also represented by the talent agency WME. In December 2020, Chase was signed to Interscope Records by Adam Mersel.

He further starred with the famous actress Sydney Sweeney in Downfalls High, the film adaptation of Machine Gun Kelly’s album Tickets to My Downfall. The film premiered on 15 January 2021.

Unfortunately, the film gained more than 16 million views in the first weekend. This led him to gain more popularity among the media.

Later, Chase Hudson released his debut single “21st Century Vampire” on January 21. Back on 18 February, he released his second single “The Eulogy of You and Me” which was produced by Travis Barker.

He then released his third single “America’s breakup and its outcomes. The music video features a cameo from internet celebrity and dancer, Charlie D’Amelio.

Chase Hudson is currently unmarried. While talking about his relationship status, he is also single and has no girlfriend publicly as of August 2021.

Earlier, he had a girlfriend name Charlie D’Amelio with whom he dated from February 2020 to April 2020. She is also a renowned internet and social media personality.

Earlier, he had also dated Cynthia Parker in 2019.

Chase Hudson is a strong follower community on his social media profiles. Currently, he has more than 90.8k followers on his Instagram profile and over 2.9 million followers on his Twitter profile.

If you look clearly, you would be able to see that he has a huge number of followers on his Twitter profile than on his Instagram profile. This makes it clear that he mostly uses his Twitter account for interacting with his followers.

Hudson has also a YouTube channel. He created his channel on 9 May 2018 and was named LILHUDDY.

He has currently over 2.24 million subscribers on his YouTube channel and has uploaded more than 18 videos.

Apart from this, Chase Hudson can make a strong capital through social media promotions and brand advertisements.

Ultimately, he has enough capital to use for a luxurious life. However, he is earning more and more every day and that day wouldn’t be far when he would be counted among the top paid singers.

He is really an inspiration for the youth of this world. He achieved such great success at an age of 19 only. This is remarkable and motivational for the people of this world.

Everyone should need to learn from his story to manage the way of living a good life. Chase Hudson is now successful and all he is doing is following his profession. In this way, he is living his life very happier than ever.

I hope you loved reading the biography of Chase Hudson and enjoyed it. Let you share your opinion about him and his story.