Harry Jowsey is a reality television personality and a social media influencer. He rose to fame with New Zealand’s reality dating show Heartbreak Island and later with the Netflix reality dating series Too Hot to Handle in the year 2022.

There have been many interesting controversial statements regarding his handsome hunk.

Read on to find out!

Who is Harry Jowsey? 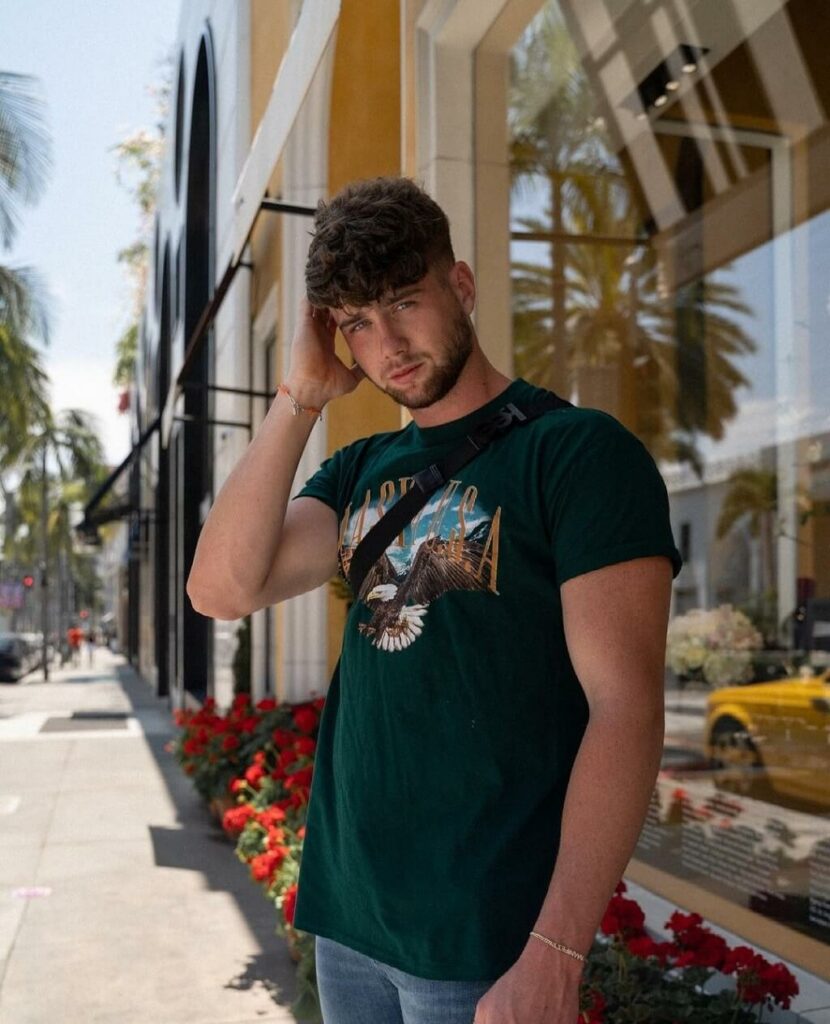 Harry Jowsey, born in Australia is a hot name on social media. He is an Internet sensation who rose to fame from reality shows.

Also an entrepreneur, he has launched a clothing and a sunglasses brand. Additionally, he has also started his own podcast Tap In with Harry Jowsey, and launched his dating app, Lolly.

He was born and raised in a well-settled Christian family from Yeppoon town of Queensland, Australia.

However, his family later shifted to California, in the United States when he was quite young. Harry Jowsey thus holds an American nationality. He belongs to the white ethnic descent

Harry has his belief in the Christian religion.

As far as the names of his parents are concerned, it is not known. However, both his mom and dad are businesspersons.

Whether he has any siblings or not is not known as of now as he does not like to disclose such details on social media.

Since childhood, he has been very active in sports and other co-curricular activities.  He always has a desire of becoming a popular celebrity and for that, he started his online career at an early age.

Harry Jowsey came into the limelight in 2018 after competing in and winning (together with Georgia Bryers) the first season of New Zealand’s reality dating show Heartbreak Island.

In the show, he was known as Heartbreak Harry.

In 2020, he became a part of the Netflix reality dating series Too Hot to Handle which made him even more famous.

The same year, he appeared in the Jamie Lynn Spears and Chantel Jeffries song and music video Follow Me. In 2021, he was roped in as a cast member for MTV’s reality television miniseries Match Me If You Can and also appeared as a guest in the talk show – The Simonetta Lein Show.

Apart from television shows, he has also built a huge online presence and has over 3.8 million followers on his Instagram account @harryjowsey.

His YouTube account – Harry Jowsey has over 130K subscribers, and videos from his podcast Tap In with Harry Jowsey.

In the podcast, together with his friends, he discusses relationships, drama, and gossip. He launched his other YouTube channel – Just Harry Now – in 2020 and it has over 321K subscribers.

He has also modelled for brands like Tommy Hilfiger and Calvin Klein.

Harry Jowsey is also an entrepreneur. He has launched his own clothing brand Naughty Possums and environmentally-friendly sunglasses brand Kensington.

In 2021, he partnered with Disney star Milo Manheim and YouTube personality Mike Majlak to launch a dating app Lolly, which he described as TikTok meets Tinder.

He is associated with the creative marketing agency – Unruly Agency.

Harry Jowsey is currently in a relationship. He is not single as of now.

Harry Jowsey’s marital status is unmarried. He is in a relationship with the beautiful actress Francesca Farago.

They both confirmed their relationship in April 2020, after the show came on Netflix. They both have the same tattoo on their index fingers to show their love for each other.

The couple happily spends their life together and often post each other on their social media.

Harry was in a relationship with a fellow contestant named Georgia Bryers in the show “Heartbreak Island”, with whom he ultimately won the show.

However, they both broke up within six months after the shooting of the reality show was over. And since then his only love is Francesca Farago.

Though he sometimes has claimed how difficult it can be to maintain a relationship with her, they still are going strong.

He became famous after contesting Netflix’s reality show, Too Hot To Handle (2020). Millions of followers have accumulated on his Instagram account.

His social media and accounts like Instagram and YouTube have become his main source of income since he has gained a huge number of followers on his sites.

Also as mentioned earlier, he has won a large sum of money from the reality show Too Hot To Handle.

Harry Jowsey also earns money through his modeling ventures and even does brand promotions on his social media.

He lives a very comfortable and lavish life with his family in the United States.

Harry Jowsey is a handsome lad with 5 feet 10 inches or 178 centimeters of height. He has a weight of about 65 kilograms or 135 pounds.

Harry has dark brown hair and brown eyes. He has an extremely chiseled and perfect physique.

He works out a lot for it and always eats healthy food to maintain his abs.

So this is all you need to know about the winner of the reality show Too Hot To Handle. Thank you for reading this article about Harry Jowsey.