Who is Mahatma Gandhi? Political Leader, Biography and History

Mahatma Gandhi was a salient Indian leader who had given an unforgettable role in the independence of India from British rule. He was professionally a lawyer and had made use of nonviolent and peaceful disobedience. He was assassinated by gunshot on 30 Jan 1948 after achieving his mission, to make India fully independent.

Gandhi Ji is not only honored in India, but he had also made his valuable identity in South Africa. Gandhi Ji was a simple living person who always believes in nonviolent and peaceful resistance, due to his great works for India,  he is known as the “Father of the nation ” of India county.

Mahatma Gandhi (Mohan das Karamchand Gandhi) was born on 2 Oct 1869 in Porbandar, Gujarat India in a Hindu family. His father ‘Karamchand Gandhi’ was Cheif Minister Diwan of Porbandar state and his mother ‘Putli bai’ was a profoundly religious woman but her usual sense and religious vernation had a lasting impact on Gandhi’s Life. 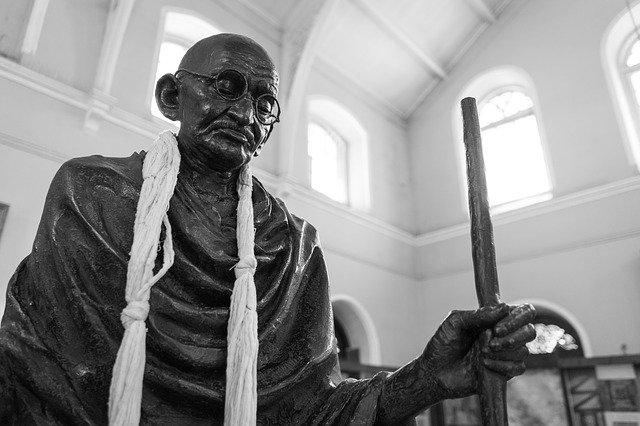 Young Gandhi was a faint and unremarkable student and was so cautious in his teenage. Gandhi rebelled by smoking and eating meat from an early age, his father hoped that he would be a government minister and lead him to enter the legal community.

After the death of Gandhi’s father in 1888, he went to London, England for his law education. He passed his matriculation examination in June 1880 at the University of London and he passed his Roman law examination in March 1890 and finally, he passed the bar in January 1891.

Before coming to England, he was promised by his mother to not eat meat but he faced too many difficulties in finding a vegetarian restaurant in London.

He joined the vegetarian society and had also come into contact with theosophical society in 1889, where he was mate with Anni Besant before leaving London on 12 June 1891. When he arrived in India, he founded that his mother had died and that news was kept out from him.

After returning to India from England, he was contracted to perform legal services in South Africa. In 1893, he voyaged for Durban in the South African state of Natal.

When he arrived there, he was dismayed by the racial segregation and discrimination against Indian immigrants. when Gandhi Ji appeared in a Durban courtroom, he was asked to remove his Turban but he neglected and left out the courtroom. Gandhi Ji was mocked by the Natal advertiser in print as “an unwelcome visitor”.

During his train trip to Pretoria, he was thrown out from a first-class railway compartment on Pietermaritzburg station and he was also bearded from hotel reserves, so he spent his Nights on railway stations. Gandhiji’s act of civil – disobedience arose a determination in himself to fight the disease of color prejudice.

He consecrated that night to fight out the disease and endure hardship in his mission and from that night, he grew up into a Giant Force for civil rights. Gandhiji made the natal Indian Congress in 1894 to fight against racial segregation and discrimination against Indian immigrants.

After his short trip to India in 1897, he was coming back to South Africa with his wife and children and started a prospered legal practice. At the irruption of the Boer War, he raised all the Indian corps of 1100 volunteers to support the British cause, Controversing that if Indians will expect the full rights of citizenship in the British Empire, they also needed to take their responsibilities.

The condition of Champaran cultivators is piteous under the Tinkathiya system. In this system, cultivators had to cultivate Indigo on 3/20 parts of their land and the British forced them to sell Indigo at lower prices and they export that Indigo to another country at a higher price. Due to this system, the land lost its fertility and that became also a big problem for the cultivators.

When Mahatma Gandhi was in Lucknow, Rajkumar Shukla invited him for the Champaran problems. After looking at the troubles of farmers, Mahatma Gandhi launched the civil – disobedience movement and started the demonstration and revolts against the landlord’s Zamindar.

The British Government prepared the Champaran agrarian committee in which Gandhi Ji was also a member. As a result, the British government accepted all the demands of Cultivators, and the Champaran Satyagraha was successfully Completed.

The Khilafat movement was begun by the Ali Brother to revolt against inequities done with Turkey after the first world war. This movement was started against the British government to reinstate the falling status of the Caliph in Turkey. Mahatma Gandhi was elected as president in the all-India conference which was held in Delhi.

Gandhi Ji started the noncooperation Movement in 1920 due to the Jallianwala bagh carnage. He started to convince peoples to fight against the British in a peaceful way, he took the concept of Swaraj Self-rule and that became a key factor in the Indian freedom struggle. The Indians started boycotting the resources, establishments, and products of the British government ( like colleges, schools, clothes, and government offices.

Due to the boycott of schools and colleges, students have faced a huge problem in their study, so the national leaders started some National colleges and schools for students. Schools and colleges which opens at that time were Jamia milia of Delhi, Gujarat Vidyapith, Bihar Vidyapith, and many more.

But the incident of Chauri Chaura a small village of Gorakhpur changed the whole direction of this moment. In this incident, 25 police officials were killed by the Indian protestors and that made big violence, so Mahatma Gandhi ended this moment.

Gandhi Ji started this moment on 8 August 1942 during the Second World War. The main aim of this moment is to drive British rule out of India, so he delivered the speech “do or die”. Due to this, all the members of the Indian Congress were arrested by the police officials and imprisoned without any trial but the People’s continued their protest across the nation.

After the end of World War II, the British government announced to them that they will hand over the power of India. As a result, they released thousands of prisoners and the quit India movement was successfully completed.

British Government was neither implemented Nehru’s report nor sent any response, then the Congress committee authorized Gandhiji to start a mass movement. Gandhi looked for disobedience movement but he was looking for a central Idea around which the whole civil disobedience movement could be built. So, he started Dandi March to break down the salt law which was made by the British Government on 12 March 1931.

Gandhiji went out for Dandi from Sabarmati Ashram with his 78 followers and later thousand of peoples joined this movement. The Dandi March also called a white flow river because every person in that movement had worn white clothes.

He completed his 390 km journey in 24 days and finally, he arrived in Dandi on 6 April 1930. Gandhiji broke down the salt law and there he has taken a vow, that he will not return to Sabarmati Ashram until India will not get independence.

Feature of this moment

After Finishing Dandi March, Gandhiji decided to start Dharasana Satyagarh in which he was going to Raid on Dharasana Salt work. But during this movement, the British government arrested Gandhi Ji, Jawahar Lal Nehru, and other leaders of this movement, but the movement was not stopped.

After their arrest, Abbas Tyabji and Kasturba Gandhi led this movement but they were also arrested by the British government. Indian Congress wasn’t wanted to stop this movement at any cost, so Sarojni Naidu continued this movement and arrived at Dharamsala.

But the police officials started a strike against the peaceful protestors. This exposed the British Government all over the world due to the international media.

The British Government forced Lord Irwin Governor-general and viceroy of British India, 1926-1931 to Convinced the Indian Congress to join their meeting, so he went to Gandhi Ji, and their 15 days meeting completed with an agreement, this agreement known as Gandhi–Irwin Pact.

With all the terms and conditions of their agreement, Gandhi Ji ended the Civil–Disobedience movement and went out for London to join the 2nd Round meeting.

Gandhi Ji was assassinated on 30 January 1948 by Nathuram Godse in the compound of Birla House now Gandhi Smriti in New Delhi. Nathuram fired three bullets on Gandhi Ji chest and stomach at point-blank range and he also tried to shoot himself but he was failed.

He was confiscated and hustled away while the crowd cried out, “Kill him, Kill him” and threatened to lynch him. Nathuram considered Gandhi Ji to have been too accommodating to Muslims during the partition of India. Nathuram and his collaborator Narayan Apte were hanged in the Ambala jail on 15 November 1949.